Find news and info on COVID-19 from West Chester HERE.

The Butler County Engineer’s Office reports that construction to convert the Union Centre Boulevard/ I-75 interchange to a Diverging Diamond Interchange (DDI) begins this week. The DDI will allow for a free-flowing movement of traffic at a higher capacity with additional lanes and a safe pedestrian crossing.  Butler County Engineer Greg Wilkens noted, “The DDI will eliminate left-hand turns, so drivers won’t have to wait for a left-turn signal to get on the interstate.”

Construction of this momentous project will last for two seasons with the utmost effort to minimize traffic delays at the interchange. Traffic will be maintained with some lane closures and a four or five-day road/bridge closure over a weekend.  Motorists are encouraged to have patience and expect possible delays. 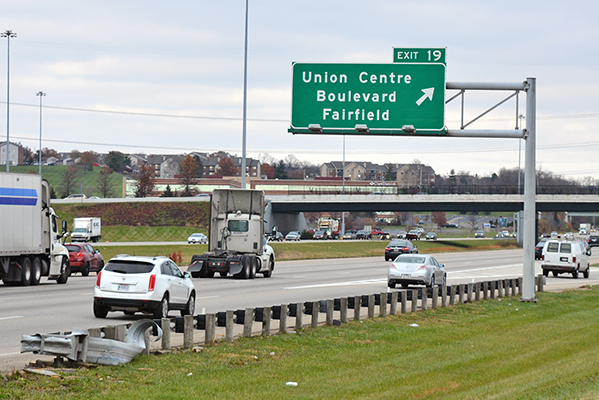 The Butler County Engineer’s Office, together with West Chester Township, will keep the traveling public well informed as to the progression of the project for continued safe commuting.

The UCB DDI project was awarded to the John R. Jurgenson Company which submitted the bid of $19,998,662 and is funded with West Chester Township TIF (Tax Increment Financing).   “Infrastructure improvements like the DDI project are consistent with the mission of the TIF, which will provide a means for continued investment by developers in commercial property keeping West Chester at the epicenter of economic vitality in the region,” said Township Administrator Larry D. Burks.

The Union Centre Boulevard/ I-75 interchange DDI project is tentatively scheduled to be completed in the summer of 2020.

Check www.bceo.org and Facebook and Twitter @bceonews for the latest updates on road closures and traffic advisories.