Residents enjoy living on tree-lined or wooded lots because of the serenity and privacy offered. These natural settings, however, often attract and support wildlife populations. Like most communities in the region, West Chester Township has a large population of deer, fox, raccoons, hawks, owls, coyote and other wildlife which can present conflicts with property owners. West Chester works with The Ohio Department of Natural Resources and other wildlife experts to support residents with their wildlife conflicts and inform them of actions they can take to address wildlife issues

The Division of Wildlife recommends techniques for discouraging wildlife interaction with humans. The most basic of these are:

Coyotes – What do I need to know? 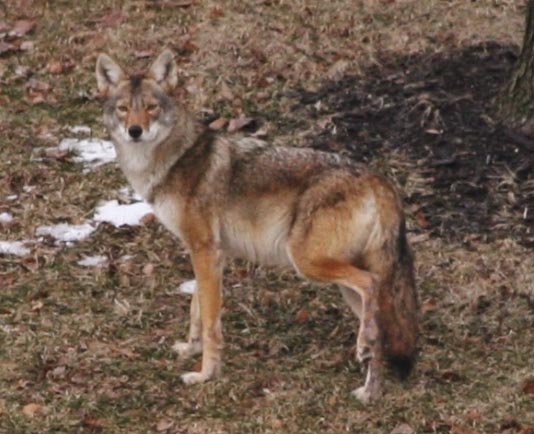 There are coyotes in West Chester and they are not recent arrivals.

The average coyote is 25 to 40 pounds, has pointed upright ears and a pointed snout. His tail is typically down and he walks in a loping fashion. Coyotes may be more visible in the winter against a backdrop of snow, but are typically most active in February. While not always visible, coyotes make their home in our community and are present even if not visible.

Studies show coyotes can live for a long time in close proximity to dense human populations without ever being noticed, but residents in some areas of West Chester Township report the animals being very visible.

Coyotes remain in areas where there is a ready food source. They are highly adaptable which has promoted their survivability in developed suburban and even urban areas. Coyotes prefer areas with plenty of cover from trees and shrubs.

Coyotes are omnivores. They eat whatever is available to them. They are adaptive and opportunistic hunters. The typical coyote food source is small mammals such as rabbit, voles, shrews and mice, and they will eat fruits, grasses, vegetables, insects and carrion. They are also attracted to food found in dumpsters, garbage cans and bird feeders.

Coyotes are territorial animals and may consider household pets a threat. Property lines and backyard fences do not define territory for these highly adaptive animals. Dogs (especially small dogs) and cats are vulnerable to confrontations with those coyotes who are either accustomed (habituated) to people (usually due to wildlife feeding), or coyotes who are protecting their territory.

Coyotes are extremely territorial. They protect their food, their mate (they mate for life), and their young. They scent mark their territories and most often do not cross into another coyote's territory. Unattended pets are no different to coyotes than any other animal in their territory. Without human protection, pets could be treated as potential prey or as competition for resources.

Coyotes have attacked pets, including those within fenced yards. 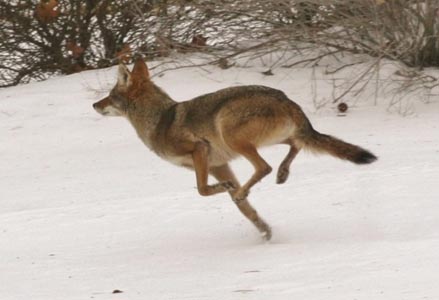 Coyote attacks on humans are extremely rare.In fact, you are more likely to be attacked by a deer than a coyote. Caution, however, is always key and residents should consider all potential risks when allowing small children to play outdoors unattended

Experts with the Ohio Department of Natural Resources indicate education is critical to understanding these animals. Just a few residents providing food outdoors for squirrels or other small mammals provides the coyote with a readily available food source and attracts them to residential properties.

Report coyotes that are acting strangely - limping, staggering - or if any wild animal approaches your home (on the porch, etc.) appearing sick or injured. These animals may act more aggressively and pose a serious threat to humans. They should be reported by calling emergency services - 911.

It's just not possible. Coyotes cannot be eradicated from an area. Coyotes removed from an area through trapping or hunting will quickly re-populate the area.

There are always coyotes on the periphery waiting to move into a newly vacated territory. In areas where there have been reductions in the coyote population due to human efforts, coyotes typically increase their litter size until the population is again brought to a level the habitat can sustain.

Eradicating coyotes would not necessarily be a good thing either. Coyotes are critical to the control of rodent populations.

When Does Co-existing Turn to Conflict?

When is the presence of coyotes no longer just a natural occurence, but rather an everyday issue affecting our daily lives in a negative way? Residents should always take steps (offered below) to discourage coyote interaction, but when is it time to talk with a trapper?

ODNR officials offer four levels of interaction to consider. When reaching level 3 or 4, depending upon your tolerance, it may be time to work with your neighbors or Homeowners Association to employ a trapper. This should not be considered a final solution, however, as coyotes will re-populate the area.

Pets and children should be monitored carefully. Coyotes aren't the only risk to pets and children. Educate your children about coyotes and instruct them to never approach any wild animal, even if it appears sick or injured. Homeowners whose property is adjacent to wooded areas should monitor the tree lines and monitor household pets carefully when outdoors, especially in the early morning and evening hours.

Making loud noises and even throwing things at the animal from a distance will discourage its approach in most cases, according to the Ohio Department of Natural Resources.

If you do encounter a coyote while on a walk, act aggressively toward the animal. Wave your arms and make yourself appear larger. Throw items and make a lot of loud noises. DO NOT MOVE TOWARD THE ANIMAL. If the animal walks away, don't let up. Persistence is necessary to discourage the unwanted behavior.

Confrontations with coyotes can be avoided by taking simple precautions or by altering behaviors to avoid confrontation. Most human and coyote interaction occurs as a result of people intentionally or unintentionally feeding wildlife.

If after removing the attractants a coyote continues to enter an area, or undesirable behavior requires increased deterrence, other steps may be necessary:

Wildlife experts do not recommend this type of activity if a coyote is injured, sick or has become cornered; in these situations, coyotes may act unpredictably.

Keep yourself safe. Some people are fearful of wildlife and are uncomfortable with interaction. If a resident feels personally threatened by any wild animal or public safety is at issue, the police should be notified.

If coyotes begin to frequent an area, many items will help repel or deter away from property. Generally these items fall under one of the following categories:  radios, strobe lights, sirens, sounds, or odor deterrents.

The Ohio Department of Natural Resources endorses trapping as one of the most effective means of eliminating nuisance coyotes. Wildlife experts caution property owners that expertise is required to trap a coyote effectively and to avoid injury to neighborhood children and pets. They encourage property owners to hire qualified, licensed trappers.

It is also important to note that trapping or hunting won't completely eliminate the issue. Coyotes will continue to re-populate their territory.

Experienced trappers can be found through the internet and phone directory or through The Ohio Department of Natural Resources at (937) 372-5639, ext. 5207. Remember: coyotes will not be completely eliminated from the area through trapping or any other means.

Coyote can be hunted anytime on your own private property with the appropriate licenses and permits. The West Chester Police Department, however, enforces Ohio Revised Code 2923.162 [PDF] with regard to discharging of a firearm and does not condone the use of a firearm in a residential community.

West Chester Township employs several approved techniques for the management of wildlife in Township parks. These efforts are focused primarily on geese, beaver and muskrat populations, although other species are monitored through reports from the general public.

West Chester Township park crews are trained and certified in the management of the geese population through the shaking and drilling of unhatched eggs. With an extensive population of geese in our parks, this is an effort that has been met with limited success. New approaches are regularly taken. In the development of water features in our parks, West Chester Township also carefully implements accepted design features that impact the geese population.

The beaver and muskrat population in West Chester has been limited to isolated areas. When these animals negatively impact storm water management on Township property, however, West Chester has employed the service of trappers. The primary means of controlling this species, however, has been the implementation of water control devices that can be easily manipulated to discourage beaver habitation where the effects can be adverse

Free viewers are required for some of the attached documents.
They can be downloaded by clicking on the icons below.